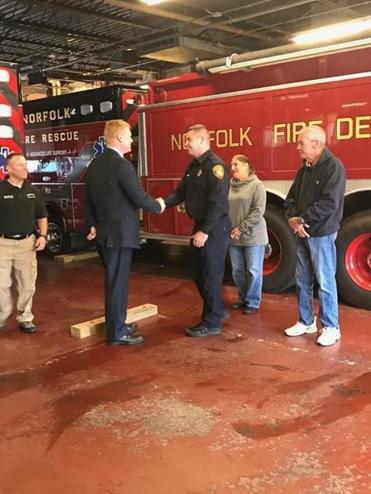 Twenty-three years later, an EMT is reunited with a boy he saved

It was the scariest day of Jim and Maria Brady’s life. It was 1993 and the couple’s two young sons were helping Jim with an oil change in the garage of their Hingham home when he left to get a tool.

Four-year-old Kevin got up on his bike and tried to lean through the window of the car, in hopes of grabbing the motor oil from the back seat

But he lost his balance.

“My bike came out from under me, and my head got caught in the window, essentially hanging myself,” said Kevin Brady, now 27, in a telephone interview Friday.

His 5-year-old brother tried to slide a stool under his feet to support him, while his parents rushed in. After his father freed the unconscious boy from the window, his mother administered CPR.

“He was very near death,” said Podsiadlo, now 47. “He had a very weak pulse and he was exhibiting other signs of brain damage, so we worked to stabilize him.”

Brady, who made a full recovery after four days in the hospital following the incident, is now an EMT himself. On Friday, he and Podsiadlo were reunited at a Norfolk Fire Department station, with Brady’s parents looking on.

Podsiadlo said it was a strange experience to see what effect the long-ago incident had on the boy as he grew up.

“To see that it influenced him – I remember at time we were surprised he even survived – that it made an impact, and now he’s paying it forward,” Podsiadlo.

Brady said the near-death experience guided him toward his career.

“The medics who did advance life support to save me were like superheroes,” he recalled. “Just realizing what was done … [I knew] I wanted to go into a field that helped people.”

The inspiration for the reunion came when Brady was interviewing for a job as a paramedic a couple of years ago. Mike Valkamas, now the EMS manager at Norwood Hospital, asked what inspired him to be a paramedic, and Brady recounted the story.

“When he described the call to me, some of the more unusual aspects of the call made it more clear,” recalled Podsiadlo. “I said, ‘I think I did that call.’ “

Brady has since saved the lives of others, inspiring the medics who inspired him.

“When you go into EMS, the standard answer is that you want to help people, and that’s true,” Valkamas said. “No one expects to get rich.

“But to be able to see a life you’ve impacted,” he continued. “That’s when you become rich.”