The IAEMSC mission is to support, promote and advance the leadership of EMS response entities and to advocate for the EMS profession. IAEMSC membership is made up of leaders from both career and volunteer EMS organizations and proudly represents and embraces the diversity of EMS agencies throughout the world.

IAEMSC is committed to serving Chief Officers representing the many various service types which exist in the Emergency Medical Services community. 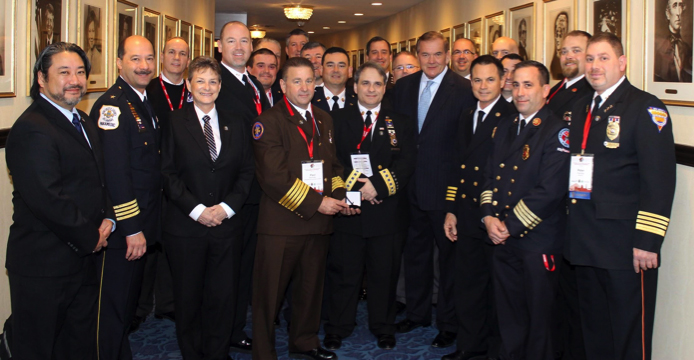 Brothers is the Assistant Chief for Howard County Fire and Rescue (HCFR). James has been with HCFR for 32 years and has served in numerous positions as a Paramedic / RN, Training Division Chief, Chief of Operations. He has received accreditation by the Center for Public Safety Excellence (CPSE) in Chief Fire Officer (CFO) and Chief Emergency Medical Services Chief (CEMSO). James completed is undergraduate and graduate degrees at the University of Maryland School of Nursing. James has worked as Family and Emergency Nurse Practitioner for the University of Maryland Hospital systems and taught part time at the School of Nursing at University of Maryland. James provides administrative and medical oversight of the Maryland’s most progressive public safety EMS systems. James is a core faculty member of the Maryland Resuscitation Academy which is committed to improving cardiac arrest survival. James has served on and has led several committees at the local, regional, and federal levels. James has received numerous leadership awards including the Harvard Fellowship at Harvard University Kennedy School of Government for State and Local Executives 2014. He is a Fellow of the American Academy of Nurse Practitioners and is the Vice President for the International Association of EMS Chiefs.

Callsen is the Assistant Chief (Retired) of Operations at Austin-Travis County Emergency Medical Services in Texas. He has a strong combination of expertise in Emergency Medical Services, Homeland Security, and Information/Communications Technology. He has previously served as the Prehospital Co-Chair, of the Texas Governor’s EMS & Trauma Advisory Council, Disaster/Emergency Task Force, Chairman of the Capital Area Council of Governments Homeland Security Task Force. He is also an author of National Incident Management System: Principles and Practices, 1st & 2nd Editions and served on as a both an Incident Commander and Planning Section Chief on an All Hazards Incident Management Team. Chief Callsen pursued his education at Georgetown University is Washington, DC and the John F. Kennedy School of Government at Harvard University.

Mitchell currently serves as the Life Support Coordinator for Children’s Hospital Colorado and its network of care.  Over the course of her 20 year EMS career she has served as a volunteer fire fighter, EMT, Paramedic,  ski patrol medic, and EMS Outreach and Education Coordinator.  For 17 years she served as a paramedic for Clear Creek EMS, 10 of which she served as the Chief Paramedic.  In addition to her past service as a board member for the Foothills Regional Emergency Medical and Trauma Advisory Council, she currently serves as a board member for the Colorado Pediatric Care Committee and the Colorado Pediatric Emergency Care Coordinator Steering Committee. Nicolena has been a member of the IAEMSC for 6 years and is currently serving a two-year team as Board Secretary.

Cormier serves as Vice-President, Emergency Management, EC, and Safety, for Medxcel.  In this capacity, he oversees these programs for the largest nonprofit health system in the United States.  Scott has led large system response to many disasters, and has published articles on hospital preparedness, emergency medical services, and influenza patient safety.  Scott chairs the Healthcare and Public Health Sector Coordinating Council subcommittee for healthcare active shooter planning and response and serves on the NFPA 3000 committee.  Scott worked professionally for the City of Pittsburgh EMS and River Rescue team.  He has over 38 years of emergency management, public safety, and military experience.

Lamphiear started his road to an EMS career watching re-runs of Rescue 8 on TV, and later in a Search and Rescue Explorer Post.  He earned his EMT certification in in 1975 and Paramedic certification in 1978, graduating from the first Paramedic class at the Oregon Health and Science University. After working his way up on the streets, Mark was hired to head EMS in Gaston County, NC in 1992. Lamphiear earned an MBA from Queens University in Charlotte, NC in 2000.  He holds designation as a Chief EMS Officer, and counts it as a privilege to serve in EMS . . . “It’s not just a job, it’s a calling”.  Mark is proud to be a Charter Member of the IAEMSC, thanks to Paul Maniscalco.  Mark is honored to serve on the IAEMSC Board of Directors.  Mark and his wife Becky have four grown kids, four kids-in-law, and nine grandkids . . . six boys and three girls.  He enjoys time with family, boating, camping, hiking, and traveling to national parks and historic sites.

Peter has been working in EMS, emergency management and safety for over 30 years. He has worked as a paramedic in NYC, as the Paramedic Director at Jersey City Medical Center and the Director of EMS and Disaster Preparedness for Saint Barnabas Health Care System. He was the Corporate Director of Support Services for MONOC Mobile Health.

Peter was the Safety Officer for the State EMS Task Force and is a member of the Federal Emergency Services Sector Coordinating Council and a member of the Mentor Committee for the International Association of Emergency Managers. He is the Past President of the International Association of EMS Chiefs. He has an MPH in Health Systems Administration; he is an OSHA Certified Safety Professional and a Healthcare Risk Manager. Peter routinely speaks at National and state conferences and has published numerous EMS textbook chapters.  He’s been named twice as one of the JEMS EMS 10: Innovators in EMS.

Nealy Jr. is a Paramedic, Peace Officer in the State of Texas.  He is the Chief Executive Officer for Cypress Creek EMS and a former Captain/SWAT Commander.  He has 33 years of experience in EMS and 24 years in law enforcement.  Wren serves on several non-profit boards to include IPMBA, IPSA, and the IAEMSC.  In 2016, Wren was appointed Vice Chair of the Emergency Services Sector Coordinating Council for the U.S. Department of Homeland Security.  He is a Nationally Certified Instructor with IADLEST and past recipient of the National Tactical Officers Association TEMS Award.

Peters is a licensed attorney and paramedic with an academic background in public health and environmental policy. For over 30 years, he has worked in urban and rural EMS as a responder and leader, with an emphasis on resilience-building activities. He is the Colorado Regional Health Information Organization’s first EMS director, a new position created in 2018 to develop and build support for new and existing EMS, public health, and emergency management uses of the Health Information Exchange. Prior to CORHIO, Peters was deputy chief paramedic for Clear Creek County (Colorado); managed the University of Colorado Natural Hazards Center’s national information clearinghouse; and served with the Denver Paramedic Division. He is a 1993 Truman Scholar (Alaska) and a 1999 U.S. Public Health Service National Research Service Awardee. He currently co-chairs the Colorado North Central Region/Denver Urban Area Security Initiative EMS Subcommittee and is a Metropolitan State University of Denver Affiliate Faculty member.

Sandbeck is currently the Chief Paramedic and Senior Provincial Director of Emergency Medical Services (EMS) at Alberta Health Services (AHS). His role is responsible for providing provincial operational and strategic leadership to all aspects of EMS in Alberta. He is responsible and accountable for leading the planning, delivery, evaluation and integration of the provincial EMS system. He provides strategic counsel to the Vice President and Chief Health Operations Officer and other Executive Leadership on all aspects of EMS operations throughout the province.

Darren holds a Master of Arts degree in Leadership from Royal Roads University as well as a Health Care Administration diploma from the University of Saskatchewan. He is also the past president of the Paramedic Chiefs of Canada and has served in numerous Board and Executive capacities on provincial and national organizations.

Dave Mitchell is a nationally registered paramedic and the EMS Chief for the Arvada Fire Protection District in Arvada, Colorado.  Dave started his career in EMS in Boulder County in the year 2000 at Lyons Fire Protection District and with a private ambulance service – Pridemark Paramedics Services.  Dave began working with the Arvada Fire Protection District in 2011 and helped to design the current EMS transport program that the District deploys.  In addition to his role with Arvada Fire, he also serves as the co-chair for the Denver Metro Regional EMS subcommittee for Incident Operations. Dave is the current President of the International Association of EMS Chiefs. He will transition to Past President in March of 2022.

You can contact us by mail at the address below: